Earlier rumors are true: the Wii Zapper is coming to town on November 19. The new controller will be bundled with Link’s Crossbow Training, a game based on Legend of Zelda series, and will retail for $19,99. 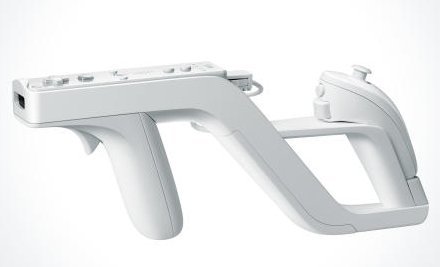 The Wii Zapper includes both the motion-sensitive Wii Remote and Nunchuk controllers in a gun-like device.

It seems Nintendo remains true to its initial marketing strategy. The company shipped the Wii bundled with Wii Sports, while the Wii controller was guarded by Wii Play. Shipping a new game to demonstrate what the new controller can do only makes sense. "The Wii Zapper combines our remarkable controllers into one housing with a classic style reminiscent of arcade-style games. Both veteran and first-time players will find it brings a whole new dimension to games where targeting is key and provides even more exciting game-play experiences." (George Harrison, Nintendo of America’s senior vice president of marketing and corporate communications)

In Link’s Crossbow Training, players assume the role of hero Link and try to prove their worth as marksmen. The game will first tests them against basic targets and gradually move on to the next level, where hordes of charging enemies are just waiting to get a piece of the action.

Third-party games that will feature supports are already in the works and the list includes EA’s Medal of Honor Heroes 2, Capcom’s Resident Evil: The Umbrella Chronicles and SEGA’s Ghost Squad.