During a recent press conference in the UK, Donald Trump shut down a reporter from the news network he loves to hate. “CNN is fake news – I don’t take questions from CNN,” he said, moving swiftly on to a reporter from Fox News. 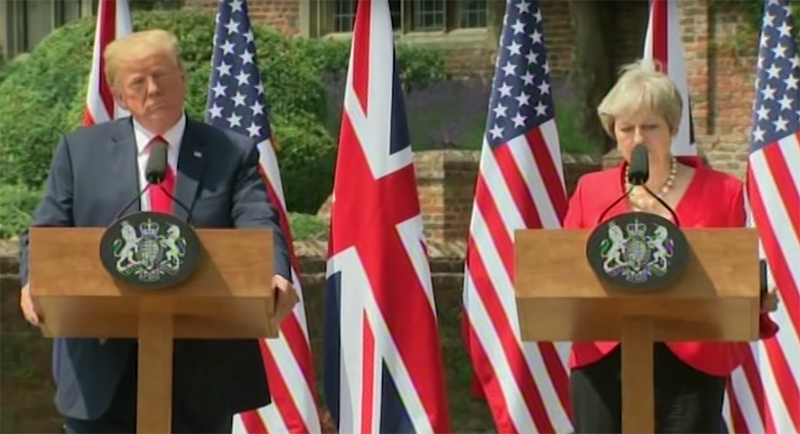 During a recent press conference in the UK, Donald Trump shut down a reporter from the news network he loves to hate. “CNN is fake news – I don’t take questions from CNN,” he said, moving swiftly on to a reporter from Fox News.

It’s easy to think that everyone knows what “fake news” means – it was Collins Dictionary’s word of the year in 2017, after all. But to think it stops there is mistaken – and politically dangerous. Not only do different people have opposing views about the meaning of “fake news”, in practice the term undermines the intellectual values of democracy – and there is a real possibility that it means nothing. We would be better off if we stopped using it.

We can start to see the problems with “fake news” by seeing how much people disagree about its meaning. Some use it as a catch-all term for problematic or doubtful information, an important example being the untrue story that surfaced on social media during the 2016 US election campaign that Hillary Clinton was involved with a child sex ring run out of a Washington pizza house.

Buzzfeed editor, Craig Silverman – who is credited with helping to popularise the phrase – has investigated Macedonian clickbait farms, which make up stories to attract profitable clicks. On his definition, as well as intending to deceive people, there is a profit motive involved. This definition fits well with clickbait farms but less well with politically motivated speech.

But “fake news” doesn’t only refer to false stories or lies. American philosopher Michael Lynch has identified what he calls the “internet shell game” – the deliberate spreading of a mixture of true and false stories to confuse the public. In this way, some true information is discredited with the false stories they sit alongside. We might think in this kind of case the whole mass of stories — both true and false — counts as “fake news”. This brings the idea of “fake news” closer to Princeton professor Harry Frankfurt’s notion of bullshit than lying. A liar says what he or she believes to be false, whereas the bullshitter says whatever is in their interest, irrespective of its truth.

The US alt-right has a more diffuse understanding of “fake news” – using it to refer to what they claim is a systematic left-wing bias in the news. This allegation of systematic bias is often used to undermine legitimate stories, as when Trump brought up media bias to dismiss The Sun’s reports that he criticised the UK prime minister, Theresa May.

The phrase “fake news” is a mess of conflicting meanings. Philosophy of language gives us several tools for thinking about terms that are in flux in this way – perhaps their meaning is sensitive to context, or they are contested – but my preferred diagnosis is that “fake news” simply has no meaning. It is nonsense – empty words.

So why use it? In the mouths of right-wing demagogues, the accusation is a command not to believe a story and to distrust the institution that produced it. In a speech on July 24 to the Veterans of Foreign Wars Convention, Trump made this message abundantly clear, saying: “Just stick with us, don’t believe the crap you see from these people, the fake news.”

This kind of speech is a classic example of what American philosopher Jason Stanley calls undermining propaganda: speech that signals commitment to a value while working to undermine it. An accusation that something is “fake news” seeks to be associated with striving to maintain truth, objectivity and critical thinking – but the effect of its repeated use is to undermine those very values. This undermining has several mechanisms: allegations of fakery sap public trust in legitimate news institutions and intellectual insults crowd out reasonable discourse.

Outside North America and Europe, the anti-democratic work of “fake news” is more explicit. In several countries, “fake news” has been used to justify censorship laws – the Burmese Military and the president of the Philippines have both used it to dismiss reports that oppose their preferred narratives.

Despite its anti-democratic effects, the association of “fake news” with democratic values makes it a honeypot for establishment figures, who have eagerly taken it up, putting on conferences and calling for a “science of fake news”. This attempt at appropriation is problematic. Trying to use “fake news” in a precise way mires the defenders of democratic values in definitional wrangles that could have been avoided by just using everyday terms.

Using the term also lends legitimacy to its propagandistic uses, making them look like reasonable contributions to public discourse. We might also worry that well-intentioned users of “fake news” will be tempted to use the demagogue’s tools to engage in intellectual policing, undermining their own commitment to open public discourse.

If we want to avoid empty talk and legitimating propaganda, we should simply stop using “fake news”. What should we put in its place? I suspect that we can do quite a lot with ordinary terms such as “lie”, “bullshit” and “unreliable”. Perhaps we do need new terms, but we shouldn’t start by trying to repurpose the demagagoue’s tools to defend democracy.