Unmanned and orbiting the Earth for almost two years, the secret place with space shuttle features has been carrying a secret mission for Pentagon. Beyond that, the only thing we know is its name: X-37B Orbital Test Vehicle. 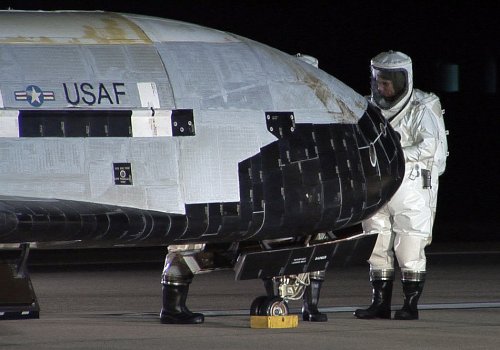 The only fact Pentagon will admit is that the space plane is used to conduct technological experiments. Some people consider it a space bomber, while others see in it a anti-satellite weapon.

Intelligence experts and satellite enthusiasts however, say X-37B is involved with carrying secret satellites and other sensors into space, taking the role that NASA’s space shuttles had before the program was discontinued.

Pentagon had a delicate relationship with NASA between 1980 and 1990 as it used the space shuttle to carry the military payload onto orbit. When frequent delays affected the shuttle launches, Pentagon become frustrated and impatient.

The X-37 solves the problem for the Pentagon, as the place does not need men and is completely under its control. X-37 is somewhat similar to a space shuttle, in the sense that is placed on orbit by a external rocket and lands on a runway. But the space plane is almost 10 feet tall and almost 30 feet long. In it’s cargo bay, it can easily store a satellite. When in space, afoldable solar array is deployed, possibly to power the sensors in the cargo bay.