Clumps in Saturn’s F ring have intrigued scientists, but a recent explanation refers to repeated impacts by small objects called moonlets, about 3 miles (5 kilometers) in diameter. 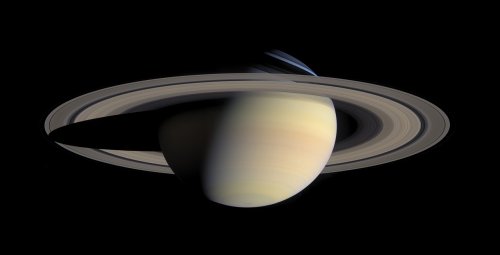 Changes in the structure and aspect of a planet take millions of years. When dramatic changes occur over the course of several decades, astronomers not only take note, but also look for answers. Subject to such investigation are Saturn’s rings, especially Ring F. Observations of Ring F over six years by the Cassini mission were compared to data collected 30 years ago by NASA’s Voyager mission during a Saturn flyby. According to this study, the number of clumps in the ring remains approximately the same, but the number of exceptionally bright clumps dropped at an alarming rate. Voyager detected two or three bright clumps during each observation, while the recent Cassini mission identified at most three bright clumps during its entire six year mission.

Most of Saturn’s ring change their over year. In contrast, Ring F changes much more frequently, on a scale of days, sometimes even hours.

To explain the phenomenon, researchers considered Prometheus, a moon of Saturn, the prime suspect. As Ring F encircles Prometheus next to Roche limit – any closer to Saturn and any object is torn apart by Saturn’s tidal wave. "Material at this distance from Saturn can’t decide whether it wants to remain as a ring or coalesce to form a moon," said Robert French of the SETI Institute in Mountain View, California.