Saints Row 2 will make it back to the virtual city of Stilwater in 2008, THQ recently announced. The sequel to the first open-world title is under development at Volition and will be released on Xbox 360 and PlayStation 3. 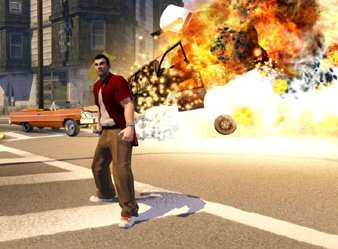 The previous game has left the main character “wounded, betrayed and thirsty for revenge”, so Saints Row 2 must come with a serious dose of retribution: "Saints Row 2 has a much darker and more sinister story that leads your character down a path of betrayal, revenge and redemption against the city that has left him for dead, although we’ve blended that with the same light-hearted humor from the original," said Greg Donovan, lead producer, Volition, Inc. "Couple that with the most robust open-world feature set ever developed in the genre, and Saints Row 2 promises a gaming experience that will offer players the perfect balance of gripping narrative and compelling gameplay options."

It’s a sequel, so improvements is the key word. THQ promises multiple customization options, including gender, age, voice, crib and gang customization. The city of Stilwater has been expanded and will feature new locations and new vehicles, such as motorcycles, boats, helicopters and planes.

Saints Row 2 will be playable online in 2-player co-op through the entire single-player campaign or in the open-world multiplayer mode.