The Redmond giant decided to revive its Sidewinder brand and unveiled a new addition: a gaming mouse featuring an LCD screen. 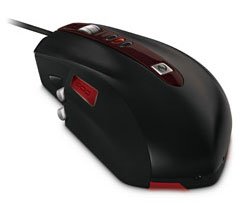 According to Microsoft, the LCD screen has been included in order to allow gamers to keep an eye on key gaming actions — including their DPI and steps for recording macros — without being distracted from the game.

“We’re taking gaming mice to a new level with a mouse created in direct response to gamer feedback from all over the world; it offers superior customization and performance handling. We found that gamers are a lot like performance car enthusiasts. They like to tweak and tune their mouse to get it just right, and today we are giving them the tools to create a personalized experience that lets them focus on what’s important: being at the top of their game.”(Bill Jukes, product marketing manager for Microsoft Hardware)

The SideWinder mouse features a performance-enhancing macro dubbed Quick Turn, which lets lets users check their perimeter at any angle from wherever they are in the game with the click of a button and a customizable wight and glide. The device comes with three sets of feet, offering varied levels of glide depending on personal preference and the surface used. Also, it ships with a weight cartridge system and comes with four weights (up to 30 grams) for gamers to choose from.

Last but not least, it features three DPI switches behind the scroll wheel that allow gamers to toggle between low-, medium- and high-sensitivity settings.

The new mouse features 5 programmable buttons and a Quick-Launch button will bring up the Windows Vista Games Explorer in Windows Vista.

The Microsoft SideWinder mouse will be release in October 2007 and will retail for $79.95