Apple introduced its “iAd” mobile advertising platform, which will allow third-party developers to embed advertisements within mobile apps, as part of iPhone OS 4. 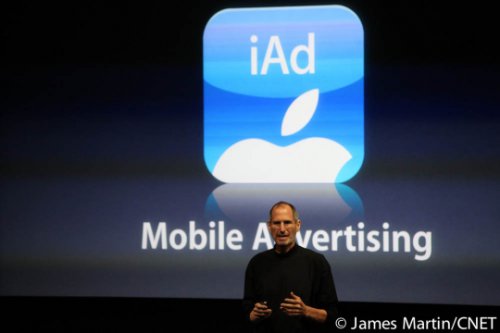 Analysts predict that the new application could bring billions to Apple while at the same time facing certain legal obstacles. The iPhone OS 4 update also includes multitasking and a social-gaming hub in addition to iAD
According to Apple CEO Steve Jobs, the iPhone and the iPod Touch could generate up to 1 billion Ad impressions per day, if users spent an average of 30 minutes engaging with advertisement-seeded apps. This would mean a large sum of money.

Brian Marshall an analyst with Broadpoint AmTech noted:  "It is in our view Apple’s new mobile advertising platform (‘iAd’) stole the show and will be significant to the financial model. In fact, we believe the iAd platform could generate an incremental $2.5 [billion] in revenue and $1.00+ to Apple’s financial model when the business hits its stride."
Marshall added: "If Apple is unable to continue designing leading-edge consumer products for mass markets, this would clearly negatively impact the financial model and result in a lower target price for Apple shares."

Due to be released this summer, the iPhone OS 4 will feature the "iAd" platform and several updates like multitasking, an ability to collect mobile applications in specific folders, a unified inbox for e-mail, and a social-gaming hub.

Jack Gold, an analyst with J. Gold Associates commented: "The iAd is a big step for Apple—their way to stick a finger in the eye of Google, and even MSFT (Bing). Sounds like the only ads going to iPhone and iPad ultimately will be through Apple’s ad-equivalent of iTunes monopoly for music. This is a game changer, and I’ll bet someone legally challenges this monopoly position (probably in Europe, where iTunes is being heavily challenged)."