Storm of Zehir, the second expansion pack for Neverwinter Nights 2 has gone gold and the release day is coming soon. 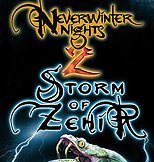 The new add-on will have players hack, slash or just spell cast their way during a 20 to 30-hour campaign. Neverwinter Nights 2: Storm of Zehir introduces new classes, such as the fearsome Hellfire Warlock and the daring Swashbuckler, as well as brand-new spells, creatures, and playable races.

• Travel the Sword Coast and Samarach with the open-ended exploration of the new Overland Map. Use skills like Spot, Survival, and Hide to avoid ambushes and even find hidden locales and lost artifacts.

• Create your own full party of adventurers. Devastate your foes with a squad of fireball-flinging Sorcerers, form a solid wall of steel with a party of Fighters, or strike the perfect balance in your party by spreading out the classes you choose for your characters.

The add-on has been developed by Obsidian Entertainment.