In less than 14 days, Mars Orbiter Mission (MOM) will deliver on its promise to meet the beautiful Red Planet. Barring unforeseen events, India’s first interplanetary voyager will fire its engine, starting the Mars Orbiter Insertion (MOI) procedure to enter the atmosphere of the fourth rock from the Sun on September 24, 2014. 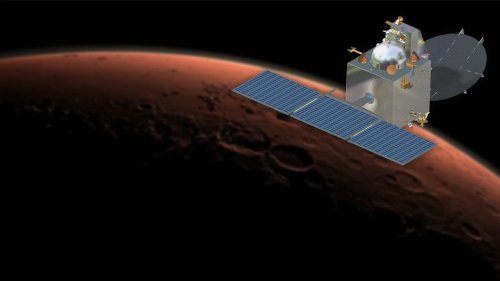 Reaching Mars orbit is a great accomplishment, but only the first step of a greater scope. The voyager will use its 440 Newton liquid fuel main engine to break the fiery speed, and take measurements of the upper atmosphere, particularly methane. In addition to demonstrating technological capabilities, MOM will carry a set of tests and measurements. With its features and equipment including a tri color imager (MCC), the probe will investigate the surface of Mars, looking for minerals and their morphology. On Earth, methane originates from both geological and biological sources, and could indicate the existence of microbial life on Mars.

Designed and developed by the Indian Space Research Organization (ISRO), MOM has already travelled more than 630 million km in a heliocentric arc, with less than 9 million km remaining to destination, after covering more than 90 percent of the journey. Round trip communication with Earth will take 21 minutes. The voyager weights 1,350 kilogram (2,980 pound) and spent ten months in space so far. The MOI will place MOM on a 377 km x 80,000 km elliptical orbit around Mars.