What’s in your stuff? Most of us give no thought to the materials that make modern life possible. Yet technologies such as smart phones, electric vehicles, large screen TVs and green energy generation depend on a range of chemical elements that most people have never heard of. Until the late 20th century, many were regarded as mere curiosities – but now they are essential. In fact, a mobile phone contains over a third of the elements in the periodic table. 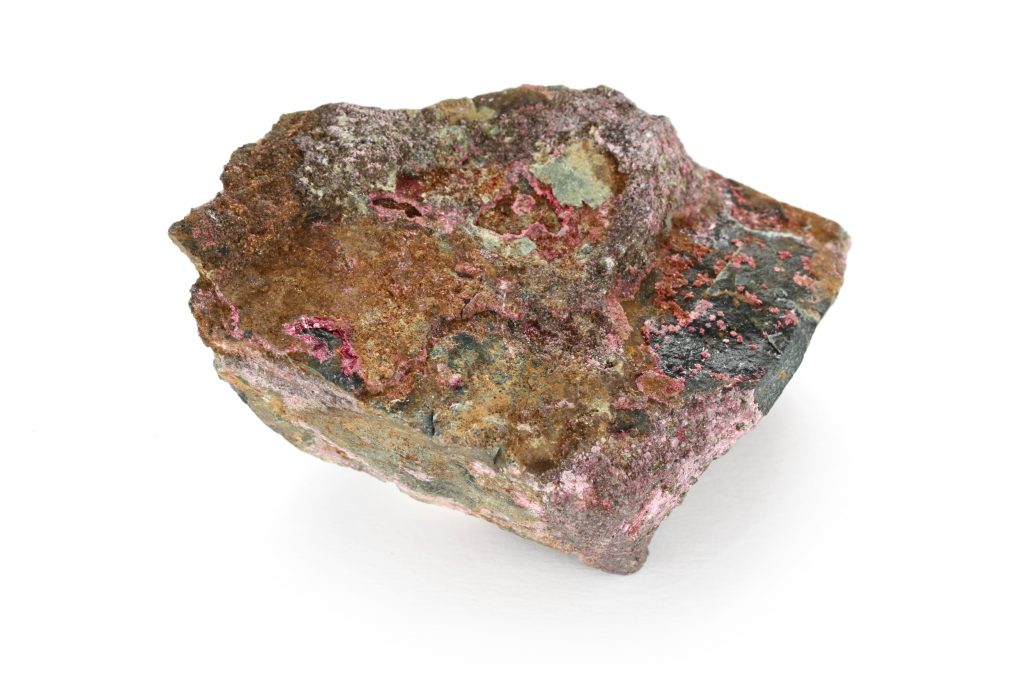 As more people want access to these technologies, the demand for the critical elements is growing. But supply is subject to a range of political, economic and geological factors, creating volatile prices as well as large potential gains. This makes investment in mining these metals a risky business. Below are just a few examples of the elements we have come to rely on that have seen sharp price rises (and some falls) in the last few years.

Cobalt has been used for centuries to create stunning blue glass and ceramic glazes. Today it is a critical component in superalloys for modern jet engines, and the batteries that power our phones and electric cars. Demand for these vehicles has increased rapidly in the last few years, with worldwide registrations more than tripling from 200,000 in 2013 to 750,000 in 2016. Smartphone sales have also risen – to more than 1.5 billion in 2017 – although the first ever dip at the end of year perhaps indicates that some markets are now saturated.

Alongside demand from traditional industries, this helped drive up cobalt prices from £15 a kilogram to nearly £70 a kilogram in the last three years. Africa has historically been the largest source of cobalt minerals but rising demand and concerns about supply security mean new mines are opening in other regions such as the US. But in an illustration of the market’s volatility, increased production has caused prices to crash by 30% in recent months.

The “rare earths” are a group of 17 elements. Despite their name, we now know that they are not that scarce, and they are most commonly obtained as a byproduct of the large-scale mining of iron, titanium or even uranium. In recent years, their production has been dominated by China, which has provided over 95% of global supply.

Rare earths are used in electric vehicles and wind turbines, where two of the elements, neodymium and praseodymium, are critical for making the powerful magnets in electric motors and generators. Such magnets are also found in all phone speakers and microphones.

The prices for the different rare earths vary and fluctuate significantly. For example, driven by growth in electric vehicles and wind power, neodymium oxide prices peaked in late 2017 at £93 a kilogram, twice the mid-2016 price, before falling back to levels around 40% higher than 2016. Such volatility and insecurity of supply means more countries are looking to find their own sources of rare earths or to diversify their supply away from China.

Gallium is a strange element. In its metallic form, it can melt on a hot day (above 30°C). But when combined with arsenic to make gallium arsenide, it creates a powerful high speed semiconductor used in the micro-electronics that make our phones so smart. With nitrogen (gallium nitride), it is used in low-energy lighting (LEDs) with the right colour (LEDs used to be just red or green before gallium nitride). Again, gallium is mainly produced as a byproduct of other metal mining, mostly for iron and zinc, but unlike those metals its price has more than doubled since 2016 to £315 a kilogram in May 2018.

Indium is one of the rarer metallic elements on earth yet you probably look at some everyday as all flat and touch screens rely on a very thin layer of indium tin oxide. The element is obtained mostly as a byproduct of zinc mining and you might only get one gram of indium from 1,000 tonnes of ore.

Despite its rarity, it is still an essential part of electronic devices because there are currently no viable alternatives for creating touch screens. However, scientists hope the two-dimensional form of carbon known as graphene may provide a solution. After a major dip in 2015, the price has now risen by 50% on 2016-17 levels to around £350 a kilogram, driven mainly by its use in flat screens.

Tungsten is one of the heaviest elements, twice as dense as steel. We used to rely on it to light our homes, when old-style incandescent lightbulbs used a thin tungsten filament. But even though low-energy lighting solutions have all but eliminated tungsten lightbulbs, most of us will still use tungsten every day. Along with cobalt and neodymium, it’s what makes our phones vibrate. All three elements are used in the small but heavy mass that is spun by a motor inside our phones in order to create vibrations.

Tungsten combined with carbon also creates an extremely hard ceramic for cutting tools used in the machining of metal components in the aerospace, defence and automotive industries. It is used in wear-resistant parts in oil and gas extraction, mining and tunnel boring machines. Tungsten also goes in to making high performance steels.

Tungsten ore is one of the few minerals that are being newly mined in the UK, with a dormant tungsten-tin ore mine near Plymouth reopening in 2014. The mine has struggled financially due to the volatile global ore prices. Prices dropped from 2014 to 2016 but have since recovered to early 2014 values giving some hope for the future of the mine.